This past week, Mercy Volunteers traveled to Philadelphia from Manayunk, New York City, Baltimore, Pittsburgh, and Savannah. They arrived at our main office in Gwynedd Valley, PA exhausted from the travel but excited more then ever. In two days we were going to see the Pope.

Sunday morning we boarded the buses and began our Pilgrimage down to the city. We walked the five miles from the stadiums down to the Ben Franklin Parkway where Pope Francis would be saying mass later that day. When we arrived closer to the event, I was amazed at the mass amount of people who stood in line waiting to get through security to participate in this historic event. So, we got in line a little after noon, and there we stood… and stood… and stood. Soon it was close to 4pm (when the mass was schedule to begin) and I looked back to see the volunteers faces, they were still all (ok, mostly) smiles, excited to get through the gates. 4pm came and passed. Then 5pm. Then 6pm. We stood in line waiting to get through security but never made it in to the actual mass. We did not see Pope Francis on Sunday nor were we able to watch the mass on a Jumbo-Tron. 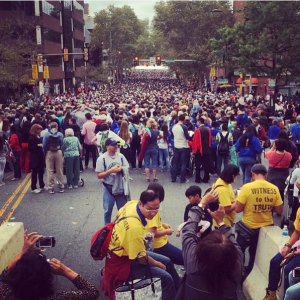 After finally getting through security at about 6:30pm, we took a quick glance at the stage where the Pope had stood not 30 minutes prior and began our 5 mile trek back to the bus. On the walk home a volunteer said “What was everyone’s favorite part of today?” Without hesitation, they each jumped in explaining their favorite things from the day. Here are 3 things that nearly brought me to tears from the Mercy Volunteers experience of not seeing the Pope in Philadelphia:

A HUGE thank you to everyone who helped get the volunteers to Philadelphia this weekend! We could not have done it without you!

In the morning, I depart for work at the hospital. After climbing into my small…

Unconditional Love: You Have Enough, You are Enough