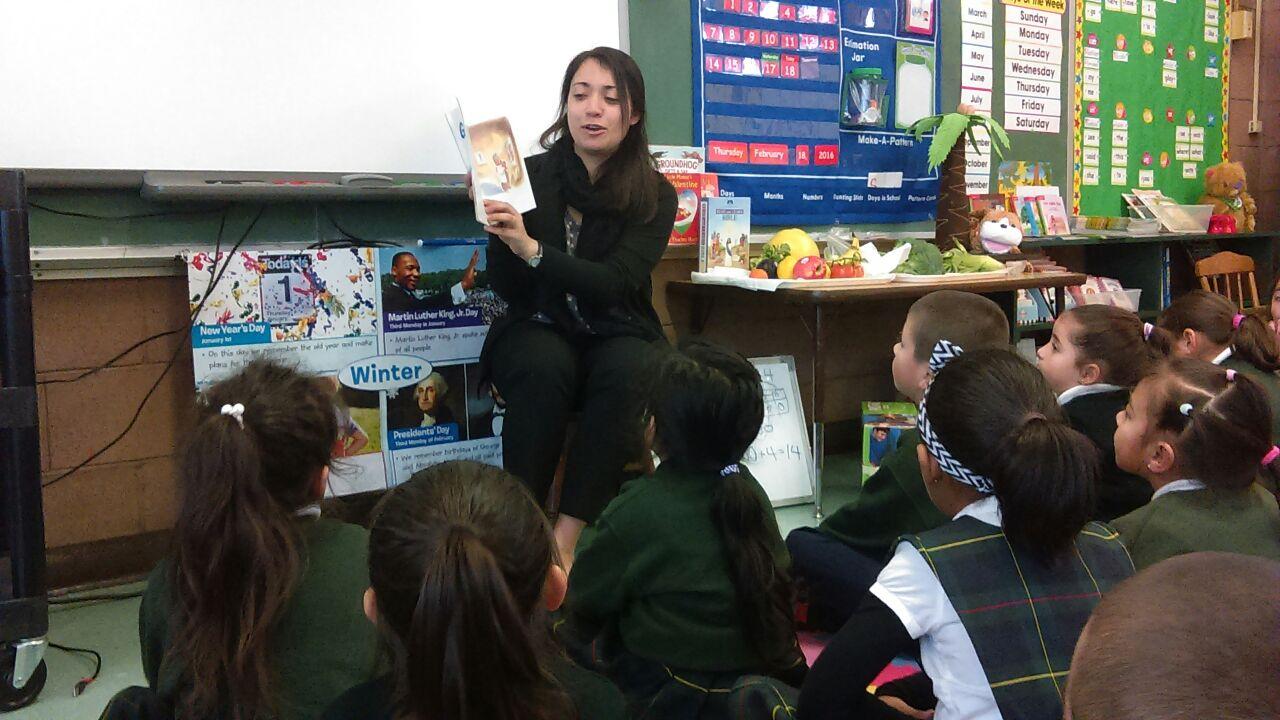 Anyone in the education field will probably back me up when I say that working in an elementary school is not for the faint of heart.  Teaching at St. Peter’s School in San Francisco has been no exception.  On a typical day, my life as a Mercy Volunteer is just like John Keenan described…chaotic.  In the mornings, you can find me teaching math to some of the most awesome 5th graders you will ever meet.  In the afternoons, it’s pretty much a toss up.  I can be anywhere from planning a school liturgy, to facilitating a science experiment, to organizing sports teams.  As my co-workers say, I wear many hats.  It has gotten to the point that I will walk into a classroom and say, “Okay I am wearing my math hat” or “Alright, today I have my sports hat.”  This past year has been one of juggling many different roles, but I have come to find that my absolute favorite hat is “community member.”

Coming into my year with Mercy Volunteer Corps, I never expected to be in a community of two.  When I heard the word “community” I thought of four to five people packed into a small, San Francisco apartment.  This past summer, when I discovered that my community would only consist of Bianca and myself, I was nervous.  Just, two people?  How is that going to work?  However, all of my anxiety disappeared the moment that I met Bianca, my rock star community member.  Bianca is one of the most authentic, genuine, caring, and awesomely radical people that I have ever met.  As a member of Faithful Fools Street Ministry, Bianca works to meet people just where they are.  The thing that I love the most about the community that Bianca and I have created is how we seem to be on the same “wavelength.”  We always find each other thinking the exact same thing, at the exact same time.  Bianca likes to joke that we were separated at birth – however, that one is a little bit of a stretch.  Nevertheless, we have come to find that we are very in-tune with how the other is feeling.  My all-time favorite example of this, occurred when Bianca was on her 7-day street retreat this past April.  This was a retreat where Faithful Fools staff and supporters spent a week in solidarity with those on the streets – eating, sleeping and being present.  When Bianca set out on her week in the streets, it affected me a lot more than I thought it would.  About mid-way through the week, I decided that I would set out to find Bianca and her group.  “The city’s only 7 miles by 7 miles,” I thought to myself.  “How hard can it be?”  I suspected that they were sleeping at San Francisco’s Unitarian Universalist Church, so I headed in that direction.  After hanging around the church for about an hour and a half, I finally stumbled upon a group of Faithful Fools.  Not too long after that, Bianca arrived, backpack and sleeping bag in hand.  With tears in her eyes, she hugged me, and said, “You are never going to believe this, but I was just at the house.  I knocked on the door, and figured that you weren’t there.”  She went looking for me, just as I went looking for her.  We sat down on the church steps, I pulled out our spirituality candle, and we had spirituality night in the chaotic streets of the Tenderloin section of San Francisco – and it was my favorite one to date.  When I arrived back at the house, I found this note (hold up note) on the front door. (read note)

Bianca says that her 7 days on the street taught her to really appreciate community.  She told me, “Anyone can say community, but I’ve discovered it means so much more.”  Bianca has taught me that community is all about being there.  Being there to tie a strangers shoe as you wait at the Metro station.  Being there to hold someone’s hand, even when they don’t even know that they need it.  Being there a midst the chaos.

Bianca loves to tell the story of how her community member from last year, Kathleen, wanted to identify themselves as friends and how Bianca would turn to her and say, “We’re not friends.  We’re community members.  We will be friends after this year is over.”  Bianca and I reference this often, when people say to us, “You are just such good friends” and we inevitably turn to one another and smile.  Because the truth is, Bianca, you are so right.  We are not friends and we still won’t be friends even after our year has finished.  We have, and will always be, community members.  For as community members, we accept one another just as we are, and all of the beautiful chaos that comes with it.  “Mercy is the willingness to enter into the chaos of another.”  Whether it is a student dancing around on the school yard, a mother that currently finds herself without a home, or a community member that needs a hug after a long day – being present in the chaos turns strangers into neighbors, and it is where true mercy can be found.

I want to thank you for coming out tonight to hear my story.  It is because of your support and generosity that I have have been able to enter into the chaotic life of a Mercy Volunteer – and I have loved every minute of it.

Jumping In With Complete Abandon: Finding My Sanctuary

Where do you find your sanctuary? As I embarked on the journey I began at…

A Path To Friendships

When I first began my year of service at Faithful Fools back in August, I…