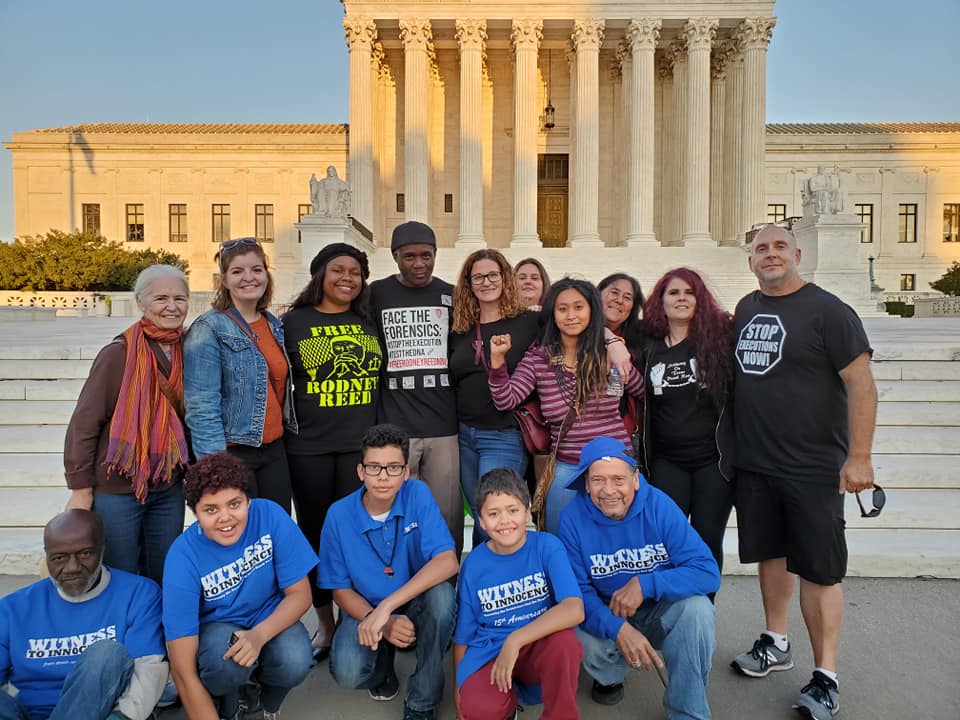 At the ripe young age of 22 with only a few short months of death penalty abolition work under my belt, I found myself at a table in Washington, DC, rubbing elbows with the movers and shakers of the movement from all over the country, some of whom have been doing this work for 30+ years. Around me sat attorneys working with people currently on death row, loved ones of murder victims, survivors of violent crime, death row exonerees, people with a passion for fixing our criminal justice system, and the most legendary figure in the movement, Sister Helen Prejean C.S.J.

Now how did I get here? Well, the site I’ve been placed at through Mercy Volunteer Corps is an anti-death penalty group called Witness to Innocence, the nation’s only organization dedicated to empowering exonerated death row survivors to be the most effective voice in the fight for abolition. We are based in Philadelphia, but for World Day Against the Death Penalty, we traveled to a few events in our nation’s capital to celebrate.

So this is how I found myself in a room full of people with decades more experience than I had. As the meeting began, we were asked to go around and share who we were and what we were excited about in the movement. I listened as people went around and shared stories from their time in the trenches, working for years with people on death row to prevent their executions, only to watch their executions and feel like the work they had done meant nothing in the end. I heard a man talk about the day his wife was murdered and he was violently attacked. He was then wrongfully convicted for the murder, but eventually exonerated.

These stories were filled with so much pain that I found myself unable to hold back tears many times. These people had experienced the worst our criminal justice system has to offer and yet, I’ve never been in a more hope-filled room because the stories didn’t end there. People turned their pain into power by using their stories to change the hearts of others. Families who had lost a loved one to violent crime had turned to mercy rather than anger to promote healing after crime rather than vengeance. Those who had watched an execution that they had tried to stop, didn’t give up. They knew that their work was about honoring the human dignity of someone on death row just as much as it was about trying to save their life.

The work that these people are doing isn’t quite what my job is like. Most of my days at work are spent in an office working on a computer. There isn’t much direct contact with the people I am serving other than the occasional phone call with an exoneree to confirm details for a speaking event or to answer a quick question. Some days can feel like the work I’m doing isn’t making much of a difference, but this trip changed my perspective completely and set my heart on fire.

An attorney who is working with an innocent man who is scheduled to be executed in less than a month broke down in tears as she shared her frustration as the execution date comes closer and closer. She was desperate for any help we could offer her, whether it was sending death row exonerees or other powerful speakers to rallies to stop the execution or posting information on our social media to spread the word. This moment made it click in my mind that the work is so much bigger than what I am doing at my desk each day.

We are working together all over the country to make small changes each day. Executions are stopped one appeal at a time. The death penalty is abolished one state at a time. Each of these changes comes after years of work by countless people. We know that this work is a matter of life or death; so we don’t give up when nothing changes for years. We hold on to the passion and the small moments of honoring each person’s human dignity and right to life.

A Time To Reflect

Do you know when you go on a retreat or go on a vacation, and…

My Year of Service with Preschoolers

Working with preschoolers is exhausting, challenging, and emotionally/mentally draining. It’s not all fun and games.…

In anticipation of Pope Francis’ visit to Philadelphia last month, a unique work of art…