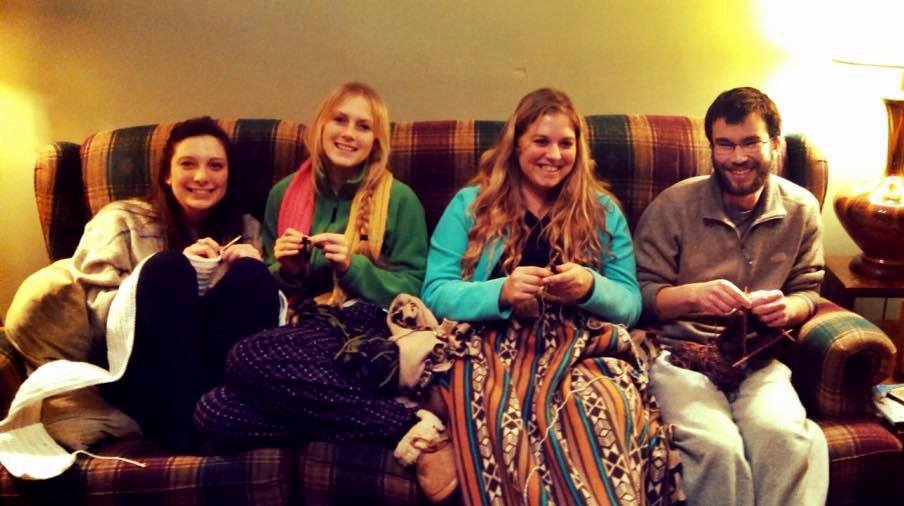 I am happy to report that I have undergone some positive changes since my last blog post. Where I previously saw social justice mainly as a protest against the current injustices of our society, I now see it more as a positive force that I can direct more and more of my energy toward, bringing into the world.

‘Yarning’ is an inclusive phrase coined by us here in the Detroit Mercy house that encompasses both knitting and crocheting. It’s a simple concept that mainly involves repeating one simple stitch over and over again and gradually creating a finished product. However, it is the simplicity of the yarning motion, the gratification of creating something with your own hands, and the communal nature of the activity that makes yarning a potentially revolutionary activity.

If the next revolution is what is pictured above (our Mercy house happily yarning), you can count me in.

Our yarning revolution first started in our house, when Kaytlin taught Ella and KT how to crochet. It extended to the greater Detroit service corps community when two Jesuit Volunteers came over one afternoon to knit. Just a few weeks ago, it gained some momentum when I collaborated with the Christ the King volunteers here in Detroit to host a yarning circle at their house attended by members of five different service corps in total, and where at least four new yarners were initiated into our peaceful revolution.

But it doesn’t stop there.

Our yarning spreads across generations – our local support coordinator Sr. Karen has started crocheting her famous rugs again, inspired by our handiworks – and states – my own grandmother back in Pennsylvania, perhaps influenced by my descriptions of our yarning circles over the phone, has started attending a knitting circle and re-learning how to make afghans.

The point is that we as a people simply need to get together to make this world a better place. Yarning has been one method of achieving this lofty goal. I feel that if we set our minds to living our lives so as to include as many people as possible, the whole world will one day be woven into one big community.

If that’s not justice, what is? I’m happy to be a part of the movement to make that a reality here in Detroit and look forward to increasing the happiness we have already found.