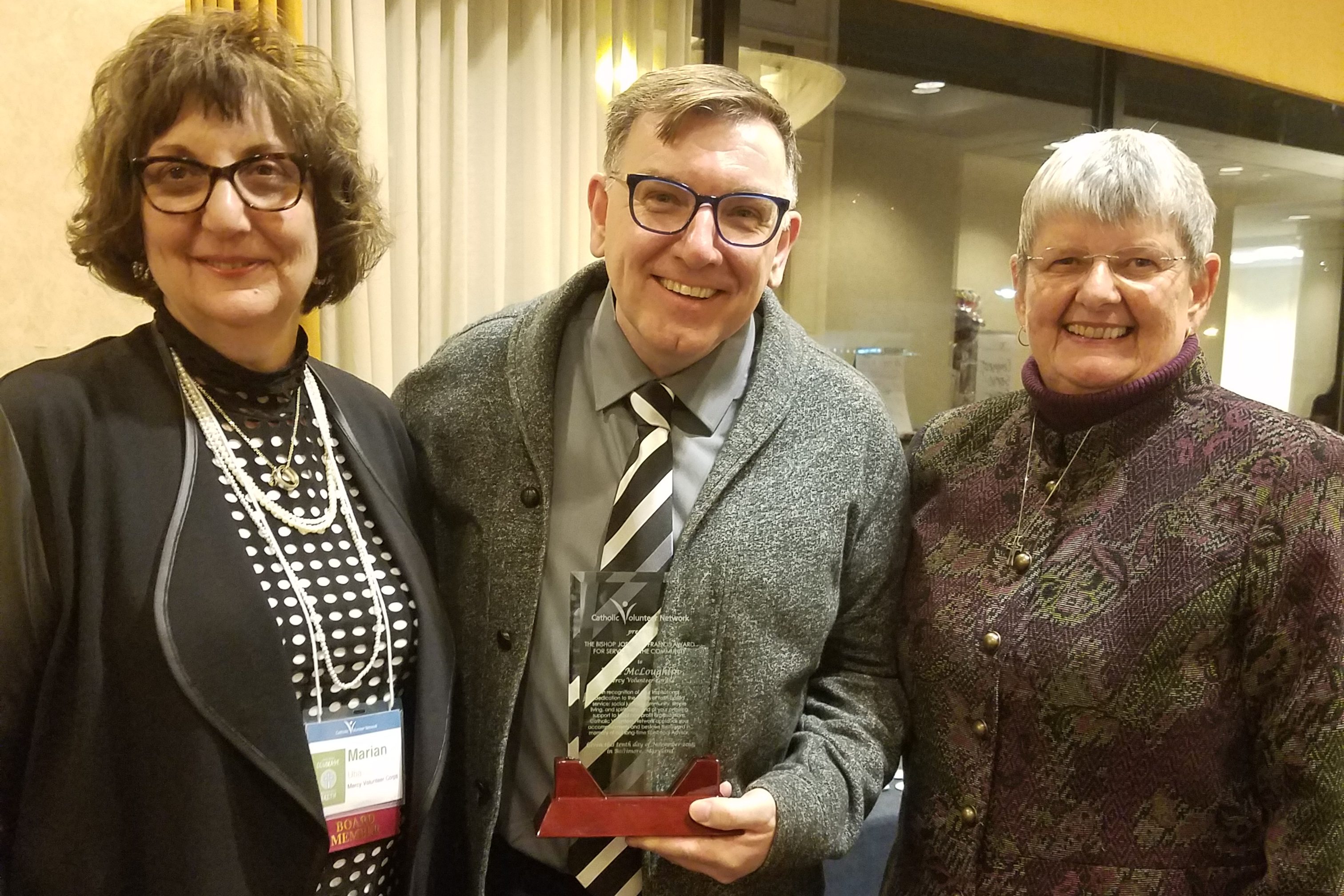 There sure is a lot of face out there… They will really think I have made it big when I tell them all back in Ireland about this night. I believe it is between Daniel Day Lewis and Colin Farrell as to who gets to play me in the Hallmark movie of my life!

This night is a moment in my life that I never expected and is really an award that celebrates so many gifts for me. In the days since hearing about this award, I have found my heart and my memories traveling back over many years and realizing that the many stepping stones I walked upon have been so gratuitously paved!

Elizabeth Kubler-Ross once asked “How do geese know when to fly to the sun?  Who tells them the seasons? How do we, as humans, know when it is time to move on? As with the migrant birds, so surely, there is a voice within, if only we would listen to it, that tells us so certainly when to go forth into the unknown.”

As a young child and later as a young adult at home in Ireland, my image of mission or that of volunteerism could only be given expression in countries like Africa, or as was so often referred to then as “The Third World”.  When this voice within me began prompting to discern volunteering and to go forth into the unknown, I was so certain that I would be Africa bound and add my name and heroic deeds to the long history of great Irish missionaries! So you can imagine my confusion one morning when I would cross paths with an energetic, vivacious non-habit wearing Sister of Mercy who spoke about many needs in the United States that Mercy Volunteer Corps addresses. I was enthralled by Sr. Kathleen Lyons and her sincerity as she spoke about MVC’s Charism and Mission – a mission that promotes social change by placing and supporting volunteers for one year of service with people who are poor and marginalized in the United States and in South America.

So not only did I listen to that voice within but I also responded and the roadways of mercy led me to St. Michael’s School for Special Education on the Navajo Indian reservation in Arizona.

I am not sure what the Navajo people’s initial reaction was when they first encountered this stranger who spoke English with a very strange accent! 1990-1991 was to be a year when I immersed myself in another culture, respecting at all times that I was a guest in their homes and being constantly humbled by the continued sharing of gifts by so many strangers whom I was to encounter.

Life among the Navajo people, especially my time with children and teens with severe disabilities, lead me to the realization that even in a world, language and climate so foreign to my own that I was being challenged by my God to immerse myself in the experience of “just being.” Whether it was tenderly holding a seizing child, assisting an adult with showering, trying to maneuver wheelchairs through muddy paths following heavy rains, or tasting dust in my mouth for quite some time after winds blew, I found myself being called to a Spiritual life which encompassed everything I did.

The Navajo people are a warm and kind race but heavens above what a language to try and learn – indeed my disastrous attempts prompted many laughs at my very own expense!!!

My Navajo friends shared their rituals, their homes, and their traditions with me expecting absolutely nothing in return. They also shared many sorrows with me, some of which I gleaned from my weekly visits to the local prison. Many of the men separated from me by prison bars and clad in orange jumpsuits were the family members of some of my co-workers. Many if indeed not all were incarcerated as a result of crimes committed under the influence of alcohol. I was exposed to stories and lives where alcohol addiction and its side effects tore with no mercy at the heart of their communities.

If I was asked what did my year of ministry and life among the Navajo people mean for me, I would have to reply with immense gratitude that this MVC experience became a movement in which I had to reach out to another being – a movement from where I thought I was the “giver” to in actual fact be the recipient of another’s hospitality. I have ever since carried the belief within my heart that the greatest gift we can give each other is rapt attention to one another’s existence.

I returned to Ireland in 1991 presuming I had done a tremendous job securing a good seat in heaven for myself – hopefully, one with a great view and a pint of Guinness close at hand! I continued to do the ordinary things in life without any great planning for my future. Lo and behold that voice spoke within and I strongly felt called again to go forth into the unknown.

So here is John again in Dublin airport and my poor Mother in tears as my parents Anthony and Brigid waved goodbye to their prodigal son! Who knew then that while we were actually saying “goodbye” we were in truth saying “hello” to a totally new path in life for me.

My first year at Stella Maris here in Baltimore was lived out in our Me Too! program – a bereavement service offering individual and group counseling for children and teens who had experienced loss. While some deaths were through hospice others were totally unexpected and often tragic. These services, while rendered in Timonium, were also carried out in many inner Baltimore City schools where I witnessed the great need for grief therapy and support.

To this day so many young tender faces and their stories sit at times uneasy in my heart. They often challenged me to question the presence or existence of a god or to scream internally and often externally why kids had to suffer so. And yet my anger always subsided because of the nurturing healing spirit that each child’s heart radiated. It also made me too; re-visit many of my own personal losses of which there were many and find peace and reconciliation within.

Having decided to renew my commitment to MVC for a second year at Stella Maris I participated in their hospice volunteer training class and soon began embracing strangers traveling a road never traveled by them before – the sacred journey from this earthly life. While Church, religion and faith at times were important to them, I began to appreciate that my time spent with them in ritual and prayer was not necessarily as enriching and as spiritually filling for them as those times I spent validating their lives lived – again, that rapt attention to another’s existence. I was so humbled by the gifts these strangers gave me when they invited me into their dying process. It was a gift I never took for granted and did all I could to ensure they knew love.

Many people have often said to me they could never work with the dying or grieving and I accept that we are all called to serve differently. MVC led me into experiences where I realized that it wasn’t me that was serving but in actual fact was God’s real love working through me. Everything I did I hope echoed the words of the prophet Micah who said “To act justly, love tenderly and to walk humbly with God.”

My life with MVC is just the story of one life but when I add it to the lives of 1200 MVC alums and 32 current volunteers I am constantly reminded that when we truly immerse ourselves in Mercy our lives are deeply affected and changed.

But tonight is not just about Irish John and MVC but about how every program represented in this room and your volunteers and alums who together with MVC selfishly create experiences where the world’s compassion is being constantly deepened. This collective ability to care, to serve and to minister must find us never tiring of sharing with our strangers those values of dignity, hospitality, justice, and prayer.

Tonight my heart embraces and thanks so many people who have journeyed with me and who perhaps I don’t often share with them how I treasure the experience and richness we created because we blended our gifts and lives together.

Who knew that in 1990 when I left Ireland for the first time that I would find myself standing at a podium sharing some of my recollections with you. And from this podium too, I shout from the rooftops my gratitude to my Sisters of Mercy, Mercy Volunteer Corps, and my entire Mercy Community for always speaking to me from a place of courage, offering words of encouragement and that your spoken words always reflected a spirit of dignity and respect.  You were always fully present to me, listening with your heart and your ears.

And so, like those migrant geese, I know that voice within will continue to call me anew and guide me lovingly into the unknown. I will take the blessings and gratitude of this night with me and as I journey on will forever affirming that our Circle of Mercy is always widening and above all is endless…

Much love my friends!

Covid on the Margins

As the pandemic continues to unfold nearly a year after reaching the United States, we…

Alumni Reflection: How My Volunteer Year Influenced My Professional Career

Born and raised in upstate New York, my first exposure to Philadelphia was through Mercy…

Looking back at my time as a volunteer with Mercy Volunteer Corps, I can honestly…