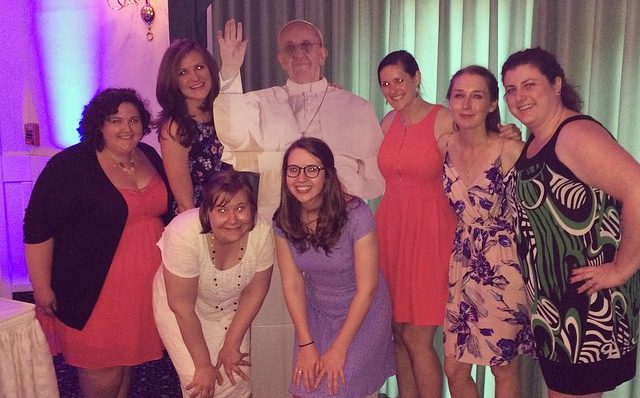 Looking back at my time as a volunteer with Mercy Volunteer Corps, I can honestly say that joining MVC was one of the best decisions I ever made.  I was fortunate enough to serve in NYC from 2011-2013 with the then new service site, Catholic Migration Services. At this site, I served in both their immigration department and in their workers’ rights department helping immigrants in dealing with legal matters and helping them realize what rights they have. In my second year, since I speak Spanish, I was called upon by many lawyers to interpret during client meetings.  It was during these meetings that I realized that not only did I enjoy it, but it was a way that I could use my talents to truly help people and because of this, after I finished my volunteer years, I started studying court interpreting. I’m currently waiting for the results of the first part of the New York State Court Interpreting Exam and am trying to become a professional court interpreter. I was also fortunate enough to have been hired by Catholic Migration Services where I work as their outreach coordinator as well as an interpreter and translator for all of their departments.

Working at Catholic Migration Services has allowed me to live out the Mercy tenants every day by serving the vastly diverse and vastly underprivileged immigrant community. Being an interpreter has allowed me to provide them the right to understand what is going on, a right which most of us take for granted and which you don’t realize you have until it is taken away from you. As an interpreter, I get to act as a bridge between two parties so that everything can be understood by everyone. It is a privilege to hear so many people’s stories and it is extremely rewarding to make their new life in the United States a little easier.

Staying in New York City has allowed me to interact with many groups of volunteers. For four years, I served as a support person for the NYC Mercy Volunteers which was a wonderful experience. Having once been in their position, it was so nice to be able to give back to them just as our support team gave so much to us. Having these volunteers ask me for advice and look up to me makes me realize how much I’ve grown since I first came to NYC as a Mercy Volunteer.

The Many Gifts of Mercy: Community, Faith, and Simplicity